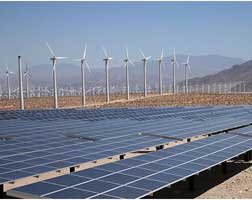 Saudi Arabia is planning to develop 30 solar and wind power projects over the next 10 years as part of its US$50 billion renewable energy program that is aimed at boosting the country’s power generation capacity and reducing its oil consumption.

The country, which is the world’s biggest crude oil exporter, is set to produce 10% of its power from renewables by 2023, according to Energy Minister Khalid Al-Falih. Saudi Arabia is also planning to utilize nuclear plants to generate electricity.

The country is currently seeking bids to build 700 megawatts (MW) of wind and solar power capacity in a first round of tenders. It plans a second tender round for rights to build 400 MW more of wind power and an additional 620 MW of solar plants, Turki Al Shehri, head of the ministry’s renewable energy project development office, said.

Saudi Arabia will tender for the wind project in the fourth quarter at a project planned for the northern area of Domat al-Jandal, Al-Falih said.

The projects are part of a plan to transform the Saudi economy by weaning it off oil and creating new industries. Saudi Arabia plans to develop almost 10 gigawatts (GW) of renewables by 2023, requiring investment of up to US$50 billion, Al-Falih said in January.

Tapping new power sources and boosting natural gas production will help the kingdom cut domestic use of oil for energy as the government plans to sell shares in the state crude producer.

Saudi Arabian Oil Co., which generates 6 GW of electricity per year, is interested in participating in the second round of bidding for renewable projects, Abdulaziz Al-Judaimi, senior vice president, said at the conference. Generating capacity will increase to 10 GW next year, he said.

Along with the planned initial public offering of Aramco, as Saudi Arabian Oil is known, the government plans to privatize the power industry to restructure the economy, Al-Falih said. The government will sell stakes in Saudi Electricity Co.’s four generation units and its transmission and distribution businesses will operate independently, he said.

“There are no dates established yet, but the process has been moving and we are working on that,” Saudi Electricity’s Chief Executive Officer Ziyad Al-Shiha said on the sidelines of the conference. The government will also create a new company to trade power locally and wants to sell electricity to other countries, Al-Falih said.

Saudi Arabia is producing around 200 MW from renewable sources, the energy ministry’s Al Shehri said. Investors picked to build the renewables plants in Saudi Arabia will own and operate the facilities for between 20 and 25 years, he said. They will be able to renew their operating licenses or sell the plants after that, and the government will not own the renewable projects, he said.

The energy ministry will issue a request for qualifications for the wind project in the fourth quarter, Al Shehri said.