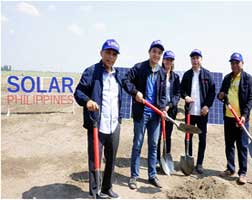 The Concepcion Solar Farm in the Philippines, touted to be the largest solar farm in the country, is expected to be completed within this year and power the entire province of Tarlac in Central Luzon.

Solar Philippines, a local renewable energy company, has broken ground on the site of the 150-megawatt (MW) solar project in the province. It is expected to be finished within six months and will have battery storage capacity, Solar Philippines CEO Leandro Leviste.

“Within six months, the 150 MW [would]have all been built, that is within 2017. That’s all owing to economies of scale. One is vertical integration by doing solar panel manufacturing in-house… The second one is economies of scale. If you have coal plants, gas plants [generating]100 MW, that’s how you can get to Php4 per kilowatt-hour (kWh). In the Middle East where they have Php1 per kWh solar, it is because they have 1000 MW plants. That is why we are making a first step by building a 150 MW plant here in Tarlac,” he added.

On the farm’s battery storage capacity, Leviste said the battery will arrive in six months. “The battery is very flexible. We can use it to supply 24 hours or we can use a larger megawatt for the early evening — a peak for many electric cooperatives here.”

“The first in the Philippines at a lower cost than coal and the first to demonstrate that renewable energy as mid-merit and even baseload is not something that will take 10 or 20 years, but is already here,” he said.

Once completed, the solar farm will be able to power the entire province of Tarlac. It will comprise close to 450,000 solar panels on over 150 hectares, with room to expand as demand for solar with batteries increases. Over three decades of operation, it is expected to offset over 3 million tons of CO2, equivalent to planting over 15 million trees.

Solar Philippines is the developer, investor, contractor, and supplier for its projects. This project will be the first to feature “Made in the Philippines” panels from the Solar Philippines’ 600-MW factory in Batangas, which started production this month. The factory is expected to create over 1,000 manufacturing jobs, the company said.

According to Leviste, the cost of putting up a solar farm has gone down dramatically. Before it was US$2.5 million per MW, then it became US$1.5 million, and now it is US$1 million per MW.

In the case of Concepcion Solar Farm, he explained that with battery storage, it can add another 20-50% of the cost of the project.

He explained that the Concepcion Solar Farm is also in answer to the call of Energy Secretary Alfonso Cusi “to build more merchant plants because if people wait for contracts before they build, it will take three years for contracting and Energy Regulatory Commission approval.”

The company plans to start construction on a number of projects in 2017, including a 50-MW facility in Batangas and Cavite which will supply Meralco under a recently signed agreement, and venture into international markets. It aims to make the Philippines a leader in solar energy worldwide.