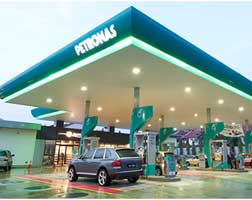 Petronas is looking to increase the non-fuel segment contribution to its downstream business this year, in line with most oil and gas companies worldwide, said its Vice President of Marketing Downstream, Datuk Seri Syed Zainal Abidin Syed Mohd Tahir.

The non-fuel segment’s contribution to the downstream business currently stands at 10 %.

“Everywhere in the world, in downstream retailing, people are already doing that (increasing non-fuel contribution) such as Shell, Esso and BP. We are trying to learn and we have done some (of that) here in Malaysia and it’s showing good success.

“Based on that lesson learned and experience, we want to expand that (non-fuel contribution) and we are going to do it smartly. It will require some time but we do have plans,” he said.
On the outlook for the downstream market this year, Syed Zainal Abidin said the market was projected to remain competitive as demand was expected to be subdued as more people had shifted towards public transportation such as the Mass Rapid Transit (MRT) and Light Rail Transit.

“Last year, the MRT came into play, so generally people tend to leave their cars in the suburbs and take the train to the city, thus cutting back on their overall long-distance travelling. This has impacted the oil and gas industry particularly the retail sector, and we believe this trend will continue this year.

“Cars nowadays (also) become more efficient such electric vehicles and energy-efficient vehicles, which means that fuel consumption will be lower for the same travel distance,” he said.

As a company, Syed Zainal Abidin said Petronas is now looking at different marketing and advertising programmes to ensure that demand can be sustained.