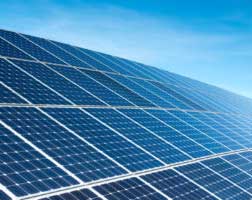 Netherlands is planning to transform an offshore seaweed farm in the North Sea turned into a large solar power farm that aims to pipe energy to the Dutch mainland in roughly three years.

The project comes at a critical time for the Netherlands, which is struggling to curb fossil fuel use and meet greenhouse gas emission targets after years of under investment in renewable energy sources.

After an initial pilot next year, a consortium comprising energy producers, scientists and researchers plans to ultimately operate 2,500 square metres of floating solar panels by 2021, said Allard van Hoeken, founder of Oceans of Energy, which devised the project.

The pilot, which will have 1.2 million euros (US$1.48 million) in government funding, will operate 30 square meters of panels from this summer. It will test equipment, weather conditions, environmental impact and energy output.

Utrecht University will examine energy production at the offshore prototype, located around 15 kilometres (nine miles) off the coast of Dutch city of The Hague at a testing zone known as the North Sea Farm.

“In addition to removing the problem of a land shortage, there are several other benefits to building at sea, similar to those in wind energy,” said solar energy expert Wilfried van Sark at Utrecht University, who is involved in the project.

“There is more sun at sea and there is the added benefit of a cooling system for the panels, which boosts output by up to 15 %,” he said.

If successful, there is plenty of space to expand the farm, unlike on the overcrowded Dutch mainland where there has been public opposition to wind turbines.

The panels will be more rugged than ordinary onshore models to account for the harsher weather conditions and tidal shifts at sea, Van Sark said.

The panels will be moored between existing wind turbines and connected to the same cables, transporting energy efficiently to end users.

Van Hoeken said he expects offshore solar energy to eventually be cheaper than offshore wind and mainland power sources, due mainly to a lack of land costs.