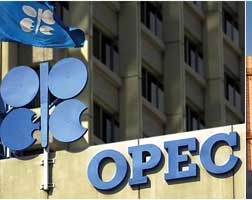 For the first time since 2008, members of the Organization of the Petroleum Exporting Countries (OPEC), in a meeting in Algeria last month, agreed to cut their oil production outputs in an effort to boost the commodity’s prices, which have fallen in the past years.

But concrete steps in achieving the cut has yet to be finalized as internal disagreements between the member nations prevent them from agreeing on specific figures.

Six non-OPEC producers recently met with OPEC members to talk and agree on coordinated action to address the ongoing global oil supply glut and prop up prices, which are still hovering at about US$50 per barrel.

Officials and experts from OPEC countries and non-OPEC nations including Azerbaijan, Brazil, Kazakhstan, Mexico, Oman and Russia met for consultations in Vienna on October 29 and only agreed to meet again in November before a scheduled regular OPEC meeting on November 30, they said in a statement.

The intergovernmental organization aims to reduce its oil output by about 1-2%, or between 200,000 and 700,000 barrels per day (bpd), and also secure cuts by other non-OPEC producers.

Old rivalries between OPEC members, especially that between the organization’s de facto leader Saudi Arabia and its rival Iran, were seen again during an OPEC meeting held on October 28.

But internal dispute among the 14 OPEC nations has prevented the group from agreeing on a single set of production figures from which to make the agreed cutbacks, and members including Iraq, Iran, Libya and Nigeria – whose output has been held back by sanctions or conflict – have asked ‎for special treatment in curbing output.

This has also stymied efforts to secure the commitment of the non-OPEC members in the agreement.The last time OPEC persuaded non-OPEC nations to make joint cuts was as long ago as the start of the millennium.

Russia, the world’s biggest oil producer, has said it is willing to freeze its output, but only once internal Opec agreement is reached, sources said.

Brazil’s representative said his country was attending only as an observer. “Brazilian production will increase in the next few years,” said Brazilian official Marcio Felix.

Azerbaijan’s energy minister Natig Aliyev told reporters before the start of the meeting he believed the global deal was still possible.Aliyev also said that they also met with the president of Venezuela, and that both countries agree that some measures have to be taken to stabilize the market.