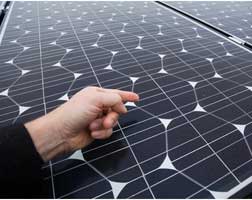 Panasonic’s HIT solar panel modules have achieved the highest efficiency of solar panels once again with a temperature coefficient of -0.258%/degrees Celsius, the world’s highest level for a mass-produced solar panel.

The company has improved the output temperature coefficient by 0.032 points (from -0.29%/degrees Celsius) by making improvements to the “heterojunction technology”, which is a characteristic of the company’s HIT solar panel.

According to Panasonic, solar modules are ideal for energy generation in hot climate areas, because their output is not affected as the temperature rises. A general silicon solar cell’s output temperature coefficient is -0.50%, which denotes a decline of 0.50% in the conversion efficiency as the module temperature rises by 1 degree Celsius.

Panasonic’s HIT modules, which boast an improved output temperature coefficient, will almost halve the decline in the conversion efficiency reliably generating power in the summer during which solar cells are known to degrade efficiency.

Modules are composed of solar cells, i.e., semiconductors, whose conversion efficiency degrades as the temperature rises, thereby reducing the output. The output temperature coefficient indicates the degree of such decline.

For instance, at the module temperature anticipated in the summer months (75 degrees Celsius), the conversion efficiency will decrease by 25% in comparison to the environment at 25 degrees Celsius. Panasonic will continue to work on technology development and mass commercialization with the aim of achieving higher power generation, and improvements in efficiency and reliability.

Atsushi Karasawa, Sales Director, Eco Solutions Division – PMMAF, said: “Renewable energy projects are a key component of current developments in the region, and there is substantial new interest and investment from government to foster solar energy. Technology innovation in the solar sector has played an important role in the rapid demand growth for rooftop solar systems in the region, and globally as well. Panasonic has been a forerunner in providing efficient solar solutions for over four decades, and with the new efficiency record, HIT modules offer huge returns for our customers’ investment while supplying reliable power generation.”