“As part of its commitment to intensify growth and increase profitability, Clariant invests in capacity expansions that provide competitive and innovative solutions to its customers. This joint investment with Rowad (Tasnee) expands our global network with a stronger position in the Middle East and Africa region, one of the important growth markets for plastic applications,” said Patrick Jany, CFO of Clariant.

The new site is located in Yanbu, a city on the Red Sea which is home to many of Saudi Arabia’s leading industries including petrochemicals, hydrocarbon and minerals. It has been constructed on a 38,000 sq m property in Yanbu Industrial Zone 2 and will focus on the production of white masterbatches. This location provides the site easy access to key raw materials and enables it to supply customers in Saudi Arabia as well as the wider Middle East and Africa region thanks to a good logistics network that includes the nearby seaport and airport. It is the second manufacturing hub for Clariant Masterbatches in Saudi Arabia, supplementing an existing site in Riyadh.

Jiaxing has been running a 1.5 million-tonnes/year PTA line since 2012 at the same location in northern Zhejiang province. 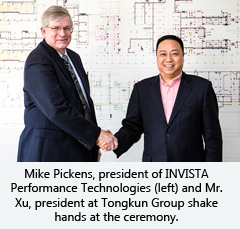 Xu, President of Tongkun Group, expressed his trust in Invista’s PTA technology and the capability of its engineers and scientists. He said, “We are pleased to see the successful start-up of our second PTA line and the operations are currently running very well.”

“We recognise that Invista’s P8 technology is a world class PTA technology. And the successful start-up is an outcome of close collaboration between the teams of both companies. We look forward to continuous cooperation in the future.” Xu added.

The achievement represents yet another major milestone for Jiaxing Petrochemical and Invista, following the start-up of the first PTA line in 2012.

Invista is one of the world’s largest integrated producers of chemical intermediates, polymers and fibres. Headquartered in the US, Invista operates in more than 20 countries and has about 10,000 employees.