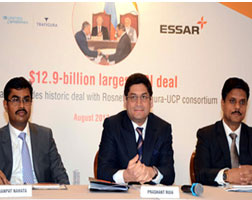 Russian oil major Rosneft, oil trader Trafigura and Russian fund UCP have closed the US$12.9 billion purchase of Indian oil firm Essar Oil, giving the companies a foothold in India. State-owned oil firm Rosneft, Trafigura and UCP purchased a 98.26% stake in Essar Oil in a deal first announced in October last year. The rest of Essar will be held by retail investors.

The deal is the first foray by Rosneft into Asia’s refining sector and the biggest foreign acquisition ever in India, as well as Russia’s largest outbound one. It also deepens Russian and Indian economic ties that stretch back to the Soviet era.

Commenting on the closing of the transaction, Rosneft’s CEO Igor Sechin stated: “Together with our partners we intend to support the company to significantly improve its financial performance and, in the medium term, adopt an asset development strategy. The closing of the deal is a remarkable achievement for Rosneft too: the company has entered the high-potential and fast-growing Asia Pacific market.”

India’s oil demand is expected to rise by an average 5.9% through 2020, among the fastest in the world, according to a report by Goldman Sachs.

To capitalise on that growth, Rosneft and its partners acquire Essar’s oil refinery in Vadinar that can process 400,000 barrels a day of crude. The refinery is located in the western Indian state of Gujarat and the deal includes a port, a power plants and 3,500 fuel stations.

Rosneft says the Vadinar refinery “possesses high feedstock flexibility, with heavy grades from Latin America accounting for more than half of all feedstock processed. The refinery’s configuration is one of the most technologically complicated in the Asia-Pacific region and has significant prospects for expansion in development of the petrochemical production.”

It goes on to add, “The availability of all the necessary infrastructure (a deep-water port, storage terminals and own power station are part of the transaction), as well as Rosneft’s shares in upstream projects in Venezuela and working offtake contracts with PDVSA will provide Rosneft with significant operational synergies and help improve the refinery’s economics. A further synergy will be derived from cross-supplies of oil products to Asia Pacific markets.”

Meanwhile, Essar Founder Shashi Ruia, said: “For Essar, the closure of this landmark transaction ushers in a new phase of growth across our portfolio of businesses that hold great promise in India’s enduring development story.”

Tony Fountain, Chairman of the new Essar Oil entity, said his firm is taking over US$5 billion in debt and will also settle over EUR2 billion owed to Iran for past oil purchases. He said the company will expand its fuel station fleet to 6,000.