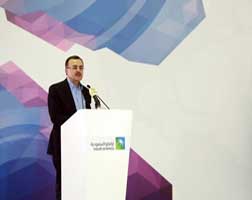 Saudi Aramco has signed agreements estimated to be worth around US$50 billion with major US companies to promote and enhance bilateral trades and agreements between the US and Saudi Arabia.

The agreements were signed in Riyadh in the presence of The Custodian of The Two Holy Mosques King Salman Bin Abdulaziz Al Saud and US President Donald Trump. President Trump’s visit to Saudi Arabia also includes a business summit attended by Saudi and US chief executives, to further cement the strong historic relations between the Kingdom and the US.

The agreements were signed by Saudi Aramco President and CEO Amin H. Nasser and his US counterpart.

“The agreements signed today by Saudi Aramco with major American companies underscore the purposeful collaboration between Saudi Arabia and the United States in areas of strategic importance linking Saudi Vision 2030 and America’s own economic depth and strength,” he said.

The agreements also highlight the magnitude of strategic growth and diversification underway at Saudi Aramco, including strengthening the company’s standing as the world’s leading energy and chemicals company and focus on local capacity building of its technical expertise and workforce.

Among the agreements signed or updated are:

Agreement with Jacobs Engineering Group Inc. to form a Saudi Arabia-based joint venture company that provides professional program and construction management (PMCM) services for building and infrastructure projects in the Kingdom. The parties also agreed to form a joint venture to provide PMCM services in the Middle East and North Africa. The agreement will create 3,000 jobs.

An MoU with Saudi Aramco to form a joint venture in the Kingdom of Saudi Arabia. Through its state-of the art manufacturing and fabrication facilities in the Kingdom and NOV’s market-leading drilling technologies, the joint venture will provide high-specification land rigs, rig and drilling equipment and offer certain aftermarket services. Additionally, the companies announced their proposed joint venture will establish an education center to train Saudi technicians in the maintenance and operation of the sophisticated drilling technology that the venture will bring to the Kingdom. It is expected to create 1,000 jobs.

An MoU which will examine the feasibility of new business development across the energy value chain including enablers covering the Oil & Gas upstream, midstream and downstream eco-system including manufacturing and services,. It is expected to create 2,000 jobs.

Within the oil and gas sector, Saudi Aramco and GE have signed an MoU to undertake a digital transformation of Saudi Aramco’s operations with a goal of generating US $4 billion in annual productivity improvements. To enable the transformation, GE will provide a private Predix Industrial IoT cloud, GE’s pioneering APM and industry-specific applications, and staff a Digital Transformation Office (DTO) with local industrial engineers, process experts, and technologists. The DTO is expected to generate 250 high-tech Saudi jobs and stimulate local economic demand for an additional 500 Digital Industrial careers. To support the growth of a broader Predix economy, GE will work within the Saudi Vision 2030 to develop a STEM educational curriculum for high schools and universities to develop Saudi Digital Industrial talent to meet future demand for developers and data scientists. The collaboration is a strong example of Saudi Aramco’s industry leadership and commitment to Saudi Vision 2030 to develop high-tech and knowledge worker careers that add significant value to the local economy.

A non-binding MOU through which the partners to Rex Offshore will develop the designs of the jack-ups rigs which they intend to manufacture through the Ras Al Khair Maritime Yard in Saudi Arabia. This MOU is an extension to the agreement signed in November 2016 to create a 50/50 joint venture to own, operate, and manage offshore drilling rigs in Saudi Arabia. The new joint venture company will use Rowan’s established business in Saudi Arabia as its base with a scope of operations covering Saudi Arabia’s existing and future offshore oil and gas fields. The new company is anticipated to commence operations in the second quarter of 2017. It is expected to create 1,000 jobs.

McDermott International, Inc. (NYSE:MDR) announced today it has signed another MOU with Saudi Aramco to expand and develop the company’s physical and human capital within the Kingdom as part of Aramco’s In-Kingdom Total Value Add (IKTVA) program. The MOU demonstrates McDermott’s support of Saudi Arabia’s Vision 2030 and Aramco’s IKTVA program. The Company has committed to a nine-initiative plan to increase its contribution to the country’s localization efforts and aid Saudi Aramco in meeting its 2021 objectives. McDermott plans to increase the number of Saudi nationals in its Middle East workforce and is expected to create 3,000 jobs.

MOU advances both companies long-standing cooperation and further supports the development and diversification of Saudi Arabia’s oil and gas sector, and accelerates the benefits of the Industrial Internet of Things (IIoT) within Saudi Aramco’s operations. The MOU will create over 400 jobs, as well as support suppliers with significant funding.

MOU will jointly explore the potential for new engineering capabilities and systems to be developed at several of Saudi Arabia’s world-leading industrial centers, supporting the IKTVA Program’s objectives of increased investment, economic diversification, job creation, and workforce development within the Kingdom.

MOU to deliver a series of projects related to localizing oil field goods and services. The MOU will create 2,600 jobs, as well as support suppliers with significant funding.

MOU to deliver a series of projects related to localizing oil field goods and services. The MOU will create over 750 jobs, as well as support services with significant worth.

MOU to deliver a series of projects related to localizing oil field goods and services. The MOU will create over 900 jobs, as well as support suppliers with significant funding.

MOU to deliver a series of projects related to localizing oil field goods and services. The MOU will create 600 jobs, as well as support suppliers with significant funding.