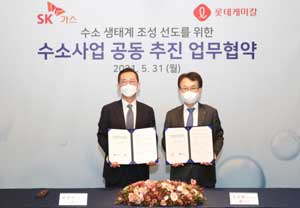 The agreement was signed by SK Gas Ltd. CEO Yoon Byung-suk and Lotte Group’s head of the chemical business unit Kim Gyo-hyun. SK Gas is a subsidiary of SK Discovery Co. and is the market leader in the country’s liquefied petroleum gas (LPG) segment.

The jv will be established by SK Gas and Lotte Chemical.

The new jv will supply by-product hydrogen produced at SK Gas and Lotte Chemical plants to hydrogen charging stations across South Korea and to other areas of hydrogen demand.

Large amounts of hydrogen are produced as a by-product during the petrochemical production processes at Lotte Chemical’s Yeosu, Daesan and Ulsan plants, as well as at SK Advanced’s Ulsan plant.

The jv will build a total of 100 hydrogen charging stations in the country using SK Gas’ existing LPG charging station sites, as well as at Lotte Group’s distribution centres and other sites owned by the group.