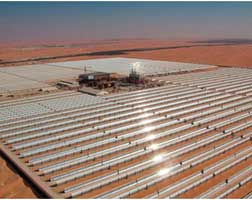 Government-owner power utility Abu Dhabi Water & Electricity Authority (ADWEA) aims to close an US$872 million (3.2 billion dirham) financing package deal in April for what is said to become the world’s largest solar power plant, according to a senior official at the utility.

ADWEA said last week that it had selected a consortium of Japan’s Marubeni Corp. and China’s JinkoSolar Holding to build and operate the 1,177 megawatt (MW) plant. The duo was selected from six bids received by ADWEA in September.

The project is ADWEA’S first foray into renewable energy. Abu Dhabi aims to generate 7% of its energy from renewables by 2020; the government’s green energy firm Masdar has launched renewable energy projects including solar plants.

The plant, to become operational in 2019, will be funded 25% by equity and 75% by debt, said Adel al-Saeedi, acting director of privatization at ADWEA. The utility would contribute the equity while local and international banks would fund the debt.

The winning bidders offered to provide electricity for 2.42 US cents per kilowatt hour (kWh), one of the most competitive prices seen to date in the solar industry, Saeedi said.

A special-purpose company would be formed to operate the project; ADWEA would own 60% of the company while Marubeni and Jinko would hold 40%. Power generated would be sold to Abu Dhabi for 25 years.

Initially the plant at Sweihan, east of the city of Abu Dhabi, was to have a capacity of 350 MW, but ADWEA increased the capacity because additional land became available, said Saeedi.