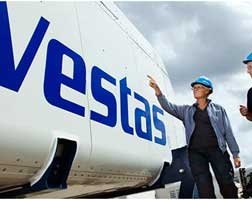 Danish wind turbine manufacturer Vestas Wind Systems A/S is looking to expand in the Middle East and the Asia Pacific markets as demand for renewable energy continues to increase in the regions, according to CEO Anders Runevad.

Vestas intends to be a “pioneer in new markets,” said Runevad in an interview. According to Runevad, there are markets in both the Middle East and in Asia Pacific that have growing energy needs which they hope will open up, with some Asia Pacific markets already opening up now.

Vestas even introduced a new turbine that will be able to operate during the kinds of typhoons and tropical storms that can hit the Philippines and Japan.

The comments follow an earlier announcement that Vestas expects to start operating in Russia, where the Danish company is planning facilities after winning contracts to supply turbines to Fortum, a clean-energy company focused on the Nordic and Baltic countries, Poland, Russia and India.

Runevad said Russia has a lot of potential and estimates the country can become a good mid-sized market.

The company is moving into new regions as the political landscape grows less certain. Investors sold Vestas shares earlier this month after US President Donald Trump announced he was pulling the US out of the Paris climate accord.

Vestas has since said the move would not prompt it to alter its North American strategy as the all-important production tax credit, which provides an incentive for renewable energy producers, stays in place for the foreseeable future.

Runevad noted that the US will still continue to be the second-biggest market globally for the foreseeable future, with India potentially becoming a challenger further ahead in the future.

To chase growth, the company is also focusing heavily on generating revenue from servicing turbines, which Vestas expects to continue to outgrow the market for new turbines.

Over the past two years, Vestas has bought German service provider Availon for EUR88 million (US$98 million) and UpWind in the US for US$60 million. These two acquisitions were the biggest independent service providers that existed in the market, Runevad said.

Integration is well in place and the company is a bit ahead of their internal plan, Runevad said, adding that finding bolt-on strategies in the integration space is definitely a part of the company strategy.