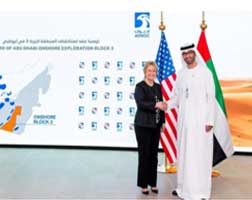 An onshore block is awarded by the State-owned Abu Dhabi National Oil Company (Adnoc) to Occidental Petroleum for US$244 million (Dh893 million) participating fee. The Onshore Block 3 in Abu Dhabi will be under the US firm’s 100% for exploration as part of a 35-year concession agreement.

Vicki Hollub, chief executive at Occidental Petroleum said that the block could hold as much as 3.5 billion barrels of oil and up to a trillion cubic feet (tcf) of gas.

“One thing that we’re excited about this Block Three in Abu Dhabi is that it’s one and half million acres, so it’s really huge. And in addition it has stack play,” added Hollub.

A stack play pertains to formations that have more than one reservoir atop each other.

Adnoc chief executive and UAE State Minister, Dr Sultan Al Jaber said “Occidental was selected after a competitive bid round in which they presented a compelling plan for exploration of the area,”

“Occidental is already Adnoc’s joint venture partner in Shah onshore gas production and processing and the award reflects our strategy to develop long-term partnerships with those who want to invest with us across our value chain,” he added.

In 2011, a 30-year right was awarded to Occidental Petroleum to develop the US$10 billion Shah gas field in Abu Dhabi. The Houston-based firm holds 40% participating interest in the development of the ultra-sour gas. This facility which is adjacent to Block Three, produces 1 bcf of gas per day as well as refine 3.5 million tonnes of sulphur annually from the fuel.

After last year’s announcement about the discovery of deposits equivalent to a 1% increase to existing oil reserves and a 7.1%addition to proven gas reserves, Abu Dhabi needs expertise to develop sour gas resources.Sour gas contains high levels of sulphur which needs to be separated to produce cleaner gas for extraction.

“So now we have the capacity up to 1.3 bcf a day. Ultimately, we’re going to look at how the reservoir performs and what additional gas we may be able to get into that plant, but I believe over time we’d be able to expand that capacity even more,” Hollub said.