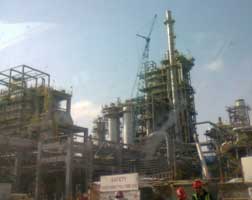 “It is our objective to not only deliver this project within schedule but also with Zero Harm to our people and the environment,” Ibrahim added.

With Wison Engineering (China)as KBR’s subcontractor, Ibrahim said that KBR is confident that Wison’s experience in executing similar sized debottlenecking in KSA will surely find the project completed ahead of schedule and more importantly safe.

The debottlenecking project is expected to be completed on August 2020.