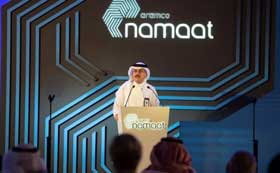 State-owned firm Saudi Aramco recently signed 22 MOUs and a joint venture agreement, in line with its plan for a major expansion of its industrial investment programme known as Aramco Namaat — all focusing on sustainability, technology, industrial and energy services, and advanced materials. Namaat, which roughly means collective growth in Arabic, was formed to “tap into the vast opportunities in Saudi Arabia to create new value.

“Through Namaat, we are attracting world-class partners who share our goal of continuous industrial development,” Ahmed Al-Sa’adi, the company’s senior vice president of technical services, said.

He added the Namaat programme leverages a range of finance, funding, tax and regulatory incentives through the Shareek programme, a government initiative aimed to boost its synergy with the private sector.

Aramco unveiled the first set of deals under the programme last year, as part of its ongoing push to diversify income sources, in line with the Kingdom’s economic transformation goals.

The agreements are seen to drive economic growth and diversification.

The 22 new MoUs signed under Namaat include: