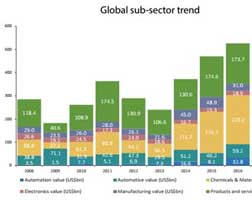 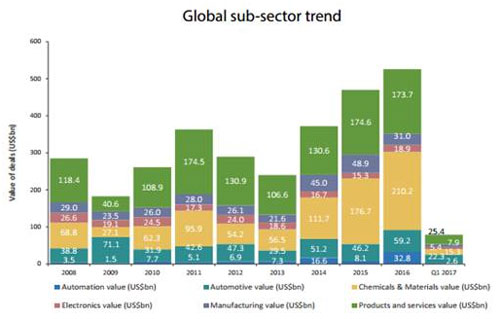 There were 146 transactions valued at US$22.5billion, accounting for 28.5% for the sector’s overall value. This was fueled by PAG Capital’s US$2.8billion buyout of Hong Kong-based Yingde Gases Group and the US$1.5billion sale of South Korea-based Daesung Industrial Gases to MBK Partners.

The main cause of the sector’s decline in deal value can be attributed to fewer megadeals (above US$10billion) this quarter. There was only one deal over US$10billion in Q1 2017- the US$14.7billion acquisition of Israel-based Mobileye by Intel – which accounted for only 18.6% of the sector’s total value. In Q1 2016, there were four megadeals worth a combined US$85.1billion, which accounted for 57% of the  I&C sector by value. Tightening capital outflows by the Chinese government also created a dent on outbound M&A activities. China I&C outbound M&A slumped 98.5% by deal value to US$761million this quarter, from US$51.4billion in Q1 2016. Acquisitions of Europe I&C companies by China and US firms have fallen 98.9% and 46.7%, respectively in terms of deal value compared to Q1 2016.

Europe was no longer the most targeted region in Q1 2017, mainly due to uncertainty over the political climate, security concerns, and the aforementioned tightening of capital outflows by the Chinese government.

Germany was the most favored region by deal value for both China and US-based investors. The acquisition of Germany-based Mauser Group by US-based Stone Canyon Industries was the top deal in Europe. The Netherland’s I&C M&A has seen a strong comeback despite a 65% drop in overall M&A value compared to Q1 2016. There was an 83.7% increase in I&C deal value with US$2.3billion across 16 deals, compared to 22 deals worth US$1.3billion in Q1 2016.

The US I&C market also suffered this quarter. With only US$18.7billion across 195 deals, deal value dropped 57.9% compared to Q1 2016. Going forward, the Trump administration may look to impose a protectionist agenda over domestic manufacturing businesses, including the automotive segment, which may cause some deal uncertainty.