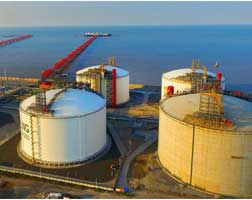 Natural gas consumption in China is expected to grow 10% year-on-year and reach 230 billion cubic meters in 2017after signs of slowing over the past two years, a report said.

In the first half year, the apparent consumption of natural gas totaled 114.6 billion cubic meters, up 15.2% year on year, according to figures released by the National Development and Reform Commission, China’s top economic planner.

China’s efforts on pollution control, market reform and steady economic growth as well as improved energy consumption structure contributed to the growth, according to the report.

The report was jointly released by the National Energy Administration, Development Research Center of the State Council and Ministry of Land and Resources.

China has been promoting efficient, large-scale use of natural gas in industrial fuel, gas-fired power and transport sectors.