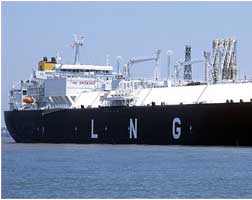 The Indian gas market may show at least six times growth by 2030 from its current levels, with liquefied natural gas (LNG) being the largest contributor, according to global oil major Royal Dutch Shell. The forecast comes at a time when India is trying to increase the share of gas in the overall energy mix to over 15% by 2030.

Currently, India is the fourth largest LNG importer after Japan, Korea, and China, and has four LNG terminals with close to 22 million metric ton (mt) of re-gasification capacity per annum. “Based on current share of 7%, Indian gas market may grow 2.5%. If gas will contribute 15% of energy basket as per the government target, it should grow six times. So, we are very positive about gas in India,” said Nitin Prasad, chairman, Shell Companies in India.

In its LNG outlook report, the company said that LNG demand growth from China, India and new entrants absorbed supply growth in 2016. The report said that while the global demand for gas is expected to increase by 2% a year between 2015 and 2030, LNG is set to rise over twice that rate at 4-5% per year.

This comes at a time when the Ministry of Petroleum and Natural Gas expects India’s LNG import terminal capacity to double to 47.5 mt by 2022. “India imported almost 20 mt of LNG in 2016-17. When we started with Hazira project in 2005, then this was zero and within a span of 12 years reaching more than 20 mt is an extraordinary growth,” said Shell Energy Asia Vice-President Ajay Shah, who is in charge of developing markets.

The company feels that demand shortage is a major roadblock to achieve this goal. Shell Gas B.V, a unit of Royal Dutch Shell Plc, owns a 74% stake in Hazira LNG. There were plans to double Hazira LNG’s capacity to 10 mt, but the company is moving slowly because of the demand shortage. When asked about the delay in expansion plans of Hazira LNG terminal, Prasad replied, “As far as Shell is concerned, we are in an advantageous position to increase the capacity when required. But the key is to see the demand in the country grow.”

The company said that to boost the LNG market in India, the government should come up with a lighter policy with strong regulation and implementation.

Industry experts believe that lack of infrastructure is the major constraint for the absence in demand. India’s pipeline infrastructure stands at 16,240 km and an additional 10,258 km of pipelines are under construction. “Some terminals are in a bit of an issue. We have firstly a demand challenge, then we have a capacity and supply challenge. We need to take it in its sequence. The utilization of existing pipelines is also about 40-50%. The real question comes on how you actually build infrastructure around that pipeline,” Prasad said.

Though Shell had planned to float an LNG terminal off the coast of Kakinada in tie up with GAIL and Engie, its progress is also slow because of the demand shortage. “We are involved in Kakinada. AP as a huge market, a lot of gas-fired power plants are idle there. Good news that is you can access it even today through pipeline networks,” Shah said.

Echoing this, Prasad indicated that the planned special purpose vehicle by India to revive the stranded 14,000 MW of the power plant is set to bring in fresh life to the sector. “It will benefit everybody and the economics of the region will start improving as underutilized pipeline network will come into action,” he said.