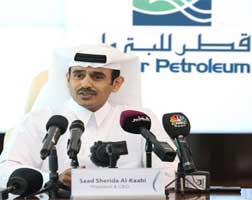 Against the back of declining oil prices, QP says the integration between Qapco and QVC is to enhance the competitiveness, financial performance, and resilience of both companies by creating a single world-class petrochemical operator achieving synergies in size, service and reliability.

As of July 1st, the resulting new single operating organisation, Qapco, will fully operate the facilities of all three companies. This operational integration will bring no change to the respective shareholdings of Qapco, Qatofin and QVC, whose brands will remain fully in place.

Saad Sherida alKaabi, QP President/CEO said, “This successful integration is another testament to our commitment to increasing the efficiency, effectiveness, and competitiveness of all our operations. I have no doubt that the combined distinctive resources and capabilities of the three companies will further enhance the value for our customers as well as for the companies’ respective shareholders.”

He also said the integration process was completed ahead of the year-end schedule.

The new operating company Qapco will now fully manage both its and QVC’s current activities. The company has plants at Mesaieed producing 840,000 tonnes/year of ethylene and three plants with a total capacity of 780,000 tonnes/year of low density polyethylene (LDPE), as well as a 70,000-tonne/year sulphur unit.