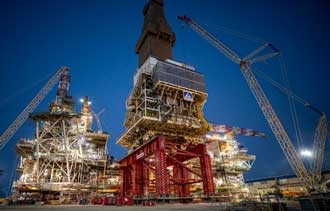 The Azeri Central East (ACE) project is the latest phase of the development of the Azeri-Chirag-Deepwater Gunashli (ACG) field, which is located in the Azerbaijani sector of the Caspian sea and operated by BP.

For construction of the project’s production, drilling and quarters (PDQ) platform, two modules – a modular drilling support module (MDSM) and drilling equipment set (DES) – were prefabricated by Azfen, a joint venture between Turkish EPC Tekfen and the State Oil Company of Azerbaijan (SOCAR), in Baku, ready for integration with the platform.

The integration planning began in 2019 – prior to fabrication, when Mammoet was tasked to perform the detailed engineering study for the integration of the modules, covering all requirements for the heavy lift operations, movement and stability calculations and risk assessments. Later, in 2022, it was selected to perform the physical integration.

Tommy Quik, Project Manager for Mammoet explains: “The combination of Mega Jack 800 with SPMTs and heavy skidding systems was perfect for the integration operation. The Mega Jack 800, with its significant lifting power and its small footprint, provided considerable stability to the base of the modules.”

He added, “Thanks to its stroke-controlled system, no fixed connection to the modules would be required, making the operation safer and less impactful for the customer. This is both in terms of a shorter execution window required in the area, which is known for its frequent and strong winds, and less temporary steel would be needed to be added to the modules for the integration operation.”

As part of a seven-week operation, Mammoet’s team smoothly transported, jacked up and skidded both modules onto the deck.

The integration started with weighing of the MDSM module. Next, it was jacked up using Mammoet’s Mega Jack 800 system, so that two modular jacking beams could be moved underneath it. Mammoet’s heavy skidding system, comprising six 800t skid shoes and a skid track, was then installed on top of the beams. This whole combination was then positioned onto 120 axle lines of SPMT, so it could be moved 100m across the site – from its fabrication location towards the platform.

Next, the combination was placed above the Mega jack 800, which was preinstalled beside the platform. The combination was then jacked-up to a height of 15m, before the MDSM was skidded onto the platform.
An additional set of skidding equipment was then used to skid the module in a transverse direction, towards its final position. The module was then transferred onto hydraulic jacks for final set down. Once the operation was completed, the team returned to repeat the process with the DES module.

Throughout the operation, engineers on site monitored live load read-outs from the Mega Jack and the skidding systems, ensuring every stage of the operation matched its planning phase. The scope was completed ten days earlier than projected, and with zero accidents or incidents: thereby contributing to the ACE topsides unit  safety milestone of 10 million hours LTI free.

Throughout the project, Mammoet says it was able to mobilise expertise and equipment from many global locations including the Netherlands, UK, Spain, UAE and Kazakhstan – ensuring the project could benefit from an efficient use of resources available globally.

Tommy Quik commented: “This is just the kind of project that Mammoet built its reputation for engineering excellence on. Our early involvement during the FEED phase ensured seamless execution. Essential to the success of the operation was the teamwork and commitment of all stakeholders involved: topside/module designers, fabricators, the marine warranty surveyor, and ultimately the project owner. We are grateful to have been given the opportunity to play our part in achieving this milestone in the ACE project.”

Mammoet will return for the final stage of the project, which will involve the jack-up and load-out of the complete PDQ platform (expected to weigh 20,750t). Mammoet’s largest jacking system – the Mega Jack 5200 – will be used for the operation, scheduled to take place in 2023.