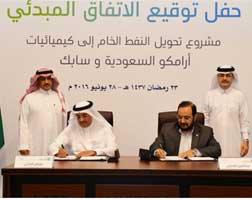 The project, known as COTC, the first major scheme to bring the two giants together, is expected to process Arabian Light and Extra Light crude oil, according to an industry source.

The location of the chemicals site is still under consideration – either at Yanbu, near a power plant, or in Jubail, close to Sadara, which is an Aramco joint venture with US company Dow Chemical.

The closing date for bids for pre-front end engineering and design work (pre-FEED) and FEED for the COTC is September 25, one of the sources said, adding that the plant is expected to be commissioned by the end of 2024.

However, when asked to comment on the matter, SABIC did not immediately respond while Aramco said it “declines to comment on rumor or speculation”.

Aramco’s chief executive has said it was a priority for the company to convert crude oil to chemicals as the state oil producer aims to diversify operations in the run-up to an initial public offering of shares next year.

Analysts say the project will help reduce natural gas usage in petrochemicals at a time when the kingdom is trying to use more gas to generate power, rather than burning crude oil, as it seeks to diversify its energy mix.

The project is strategic for Saudi Arabia, which plans to expand further into the petrochemical chain to export more end products and grow beyond oil.

It is also crucial for Saudi Arabia’s economic reform plan and could create as many as 100,000 jobs.

SABIC’s CEO said in an interview in May that COTC could produce more than 18 million tons of materials yearly.