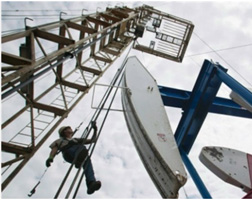 Petronas has put a massive package of oil and gas assets in Alberta on the sales block but it has no intention of abandoning the country despite the recent cancellation of its plan to build a West Coast LNG terminal, a spokeswoman says.

“Definitely, I can say from the outset that withdrawing from Canada is not what is happening,” said Progress spokeswoman Eryn Rizzoli.

“The potential sale of our Deep Basin assets, which represents a small portion of Progress Energy’s resource base, would allow us to focus on our North Montney (B.C.) development, which represents significant growth opportunities in Canada,” she added.

Petronas bought Progress Energy in 2012 and has been one of the most active drillers in north-eastern B.C. in recent years as it establishes natural gas production to feed its proposed Pacific NorthWest LNG export terminal near Port Edward, B.C.

In July, however, it cancelled the project due to poor world market prospects for its liquefied natural gas.