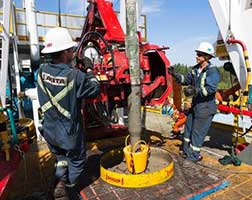 From job cuts to wage freezes to lower than expected profits, the energy sector was hit with more negative economic news Thursday.

Cenovus Energy announced it expects to lay off up to 15% of its workforce — the majority being contractors — while implementing wage freezes and cuts to spending on things such as travel.

Husky Energy officials revised their economic outlook and said it plans to spend up to US$3.1 billion this year, down from an earlier forecast of US$3.4 billion, as part of measures aimed at increasing efficiencies.

“We took a realistic approach with our 2015 business plan and continue to identify strategies to further support our balance sheet in today’s lower oil price environment,” said CEO Asim Ghosh in a press release.

Precision Drilling also announced up to 1,500 fewer employees are working on its rigs compared to the same time last year.

“Industry downturns are difficult for all, but they affect our rig crews more than anybody else,” said Precision Drilling president and CEO Kevin Neveu in a press release.

“Each one of our active rigs is crewed by 20 or 25 skilled and trained Precision field hands and at this time last year we had nearly 250 rigs running and today we have less than 200.

“Precision recruited, trained and developed many excellent crews to support the demands of our customers over the past several years, and unfortunately we now don’t have work for many of these dedicated workers.”

This was the latest announcement of layoffs and revised economic outlooks after the price of oil fell nearly 50% in recent months, but the fact most cuts involve contractors is good news of sorts, said energy economist Peter Linder.

“With significant capital spending program cutbacks we are obviously going to see a slowdown in activity and that leads to layoffs,” he said.

“But a bulk of the oil and gas industry employees who are in a technical field, engineers, geologists, and geophysicist, are not being laid off because when the industry comes back, and I believe it will be sooner rather than later, they have to be rehired.”