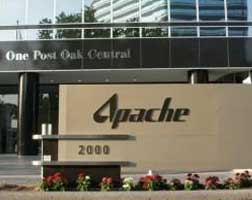 Apache Corp, one of the top U.S. shale oil producers, said on Thursday it would slash capital expenditures and its rig count in 2015 as the collapse of crude oil prices prompts it to slow drilling, keeping output growth mostly flat.

The company, which reported a multibillion-dollar net loss but adjusted earnings that beat Wall Street’s estimates, also said it would not divest its overseas businesses, with one possible exception.

Crude oil prices, down about 50 % since June, prompted Apache to cut its 2015 capital expenditures by 60 % and slash its fleet of drilling rigs by 70 %.

On a conference call with investors, Chief Executive Officer John Christmann also said the company is setting aide plans to sell or spin off its Egyptian and North Sea businesses, as they generate much-needed cash.

“Clearly in this price environment it would not make sense to monetize them and they complement things very nicely so at this point, there are no plans to sell or spin them,” said Christmann.

However, Apache is exploring a possible sale of its offshore oil assets in Australia, he said.

The Houston-based company reported a fourth-quarter loss of US$4.8 billion, or US$12.78 per share, compared with a year-ago profit of US$174 million, or 44 cents per share.

Excluding US$5.2 billion in charges mostly related to write-downs on the value of assets, Apache earned US$1.07 a share. On that basis, analysts on average had expected a profit of 76 cents a share, according to Thomson Reuters I/B/E/S.

Apache’s total output of 673,000 barrels oil equivalent per day (boepd) topped estimates by 4 %, according to analysts at Baird.

Apache, which initially planned to spin off or sell its international operations to focus on onshore shale oil wells, said its North American liquids production rose 5 %.

It said 2015 onshore North American production would be relatively flat from last year’s rate of about 302,000 barrels of oil equivalent per day, as adjusted for asset sales.

The company said its rig count will be reduced to 27 rigs at the end of this month from an average of 91 rigs in the third quarter of 2014.

Capital expenditures are expected to be around US$3.8 billion this year, down 60 % from 2014, said Christmann.