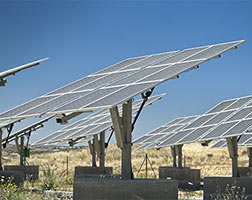 Two more solar projects in the city look like they are going to be given the greenlight.
This after much deliberation and a six-four majority vote.

The city report shows all of the business owners have already signed agreements with the project proprietors.

The latter project, proposed by Abundant Solar Energy Inc., plans for a 3.5-acre ground mount facility at 15 Daly’s Road, the owner of which has already signed an agreement with the proponent in support of the project.

By creating the FIT program, the Ontario Power Authority is trying to incentivize the development of renewable energy projects.

On the most basic level, the program allows companies and individuals to develop renewable energy projects and enter into agreement with the government to receive a guaranteed price for the energy produced over a 20-year term.

By showing their support this past Monday, council has allowed the two local projects to be awarded priority points in the provincial FIT system, assisting the evaluation and prioritization of both.

“We talk about the future for our children and grandchildren and what makes sense with renewable energy sources […] and this is good, clean energy,” Coun. George Maroosis said during the meeting.

“But one of the things that we’ve learned over time is, when you’re making adjustments that are good for the environment, the economics aren’t all that great,” he added. “The bottom line is renewable, pollution-free electricity costs more money now, but in the long run it’s going to cost a lot less money and it’s going to be better for the environment and better for our long-term goals as a civilization.”

But not everyone was satisfied with the proposals.

Despite admitting his support for previous FIT solar projects such as the solar panels on top of City Hall, Coun. Daryl Vaillancourt was perhaps the most vocal with his displeasure of the program.

As he alluded to during the meeting, the FIT program has been criticized for artificially promoting renewable energy in an unsustainable way that increases the price of electricity for everyone in the province, most notably the business and commercial sector.

Through the application of a global adjustment portion of every bill, hydro customers are subsidizing programs like FIT with increasing costs. The fee isn’t a labeled line item on residential bills, but it is identified for businesses or commercial organizations.

That was the basis for the dissenting votes from Vaillancourt and fellow councillors Mac Bain, Mark King and Mike Anthony.

“As time goes on and we see that our competitiveness in Ontario is awful […] in my opinion, we can’t in good conscience say ‘let’s take from this program that, on the other side, makes energy costs go up,’” Vaillancourt explained. “That doesn’t make any sense to me; it’s counterintuitive, it’s not fair, and it only helps to exacerbate the problem.”

According to the power authority’s website, the current rates for projects similar to those in question receive up to 38-cents per kilowatt-hour of electricity.

“The market is nowhere near that and only a government would come up with a scheme where they pay out more than what the market can bear,” Vaillancourt said during the meeting. “We have to start being part of the solution, and part of the solution is not to support high energy costs.”

Mayor Al McDonald said the city’s fee for global adjustment is well over $1 million, which is levied on the taxpayer.

Those increased costs can also act as a deterrent for large businesses and industry users who would pay far less in energy costs in neighbouring provinces with rates at a fraction of Ontario’s.

“Perhaps for you and I it will be a small hit on our bill over the shorter term, but the far bigger consumers, like your Fabrenes and large industries in town, you’ll have to look them in the eye and say ‘I was part of supporting higher hydro costs for you,’” Vaillancourt said to his council colleagues.

“There’s no doubt that companies are looking to Quebec, which for the City of North Bay is a big problem because we’re close, it’s not that much of a stretch for them to leave,” he added. “I think it’s irresponsible if this council supports a program that is extremely detrimental to industry.”

Others, like Coun. Tanya Vrebosch, felt it was advantageous for local proprietors to make the most of the FIT opportunities while they are still available.

“My view on it is to try not to penalize the local companies that want additional sources of income,” she said. “Somebody in the province of Ontario will get this FIT money. This is a company that, if they don’t come to North Bay, they might go to other communities.”

Deputy Mayor Sheldon Forgette also showed his support for the projects by arguing that the province’s so-called flawed energy costs and funding formula aren’t a city issue and that supporting local businesses is more important.

Those comments were the catalyst for backlash from other councillors around the table though.

“I think it’s our role as a municipality and elected officials that, if we see something different or we can suggest a different path to the provincial or federal government, I’m going to do it; that’s part of my role,” said Coun. Bain, who voted against the resolution.

“We have passed resolutions and we constantly bring resolutions forward that are asking the province to change their direction because sometimes there are things that are done where they don’t have regard for Northern Ontario and don’t have regard for North Bay when they are setting their policies,” he added. “It’s our role if we see something that’s not right to bring it forward.”

Moving forward, both solar panel project proponents will still have to meet municipal regulations such as planning or building permit requirements after undergoing the full FIT evaluation.