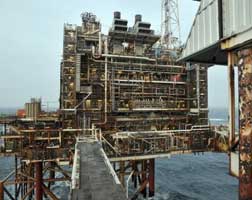 UK oil and gas companies expect to create thousands of jobs over the next two years despite the dramatic slide in oil prices.

A Bank of Scotland oil and gas report found that 39% of respondents said the price falls had affected investment.

However, when the estimates of net job gains and losses were collated, 8,000 roles are set to be created.

The total is about 2,000 fewer than the number of jobs created by the industry over the past two years.

“Fears that the current oil price slump may cost as many as 35,000 jobs in the UK oil and gas industry, widely reported in the media, may well be greatly overdone,” the report stated.

Stuart White, area director of commercial banking for Bank of Scotland, said oil and gas companies were concerned about an ageing workforce and a lack of skills.

“That explains why the industry is determined to get through the current storm without major workforce reductions,” he said.

Of the 101 companies questioned, 73 expect to increase the number of employees, with only nine predicting a reduction.

BP said in January it was cutting 300 North Sea jobs.

The fall in oil prices had resulted in a quarter of companies surveyed (24%) expressing an interest in mergers and acquisitions. That compared with a figure of just 9% in last year’s survey.

The proportion considering international expansion has increased from 64% last year to more than 90%.

“North Sea firms …are looking at international expansion opportunities where they can enjoy continued growth backed by the strong expertise they have developed here in the UK,” Mr White said.

Commodity prices was the issue that most concerned the companies surveyed, but it was only identified by fewer than a fifth of the executives questioned.

Fears about the increased cost of production were also expressed.

The number of companies interested in diversifying into areas such as onshore shale gas and renewable energy opportunities has more than doubled since last year, the survey found.

This is because the cost of oil production has risen while prices have fallen substantially.