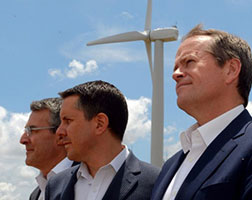 Also on Monday, cabinet will discuss a joint letter from the environment minister,Greg Hunt, and the industry minister, Ian Macfarlane – effectively an update on the lack of progress in the RET negotiations.

After fierce resistance from industry and concerted criticism of that review, cabinet asked the environment minister, Greg Hunt, and the industry minister, Ian Macfarlane, to try to reach a bipartisan agreement with Labor about the future of the program that would allow continued investment without fear of policy change.

Now Shorten, who has been under pressure from the union movement – is talking up the urgency of reaching a deal – citing as a deadline the April date when trade-exposed industries face their next normal renewable energy target liability. (Trade exposed industries are already largely exempted from the RET, but one thing the two major parties have agreed upon is that under any new deal they should be exempted entirely.)

“Since Tony Abbott launched its attack early last year, Australia’s renewable energy industry has been in crisis. Something has to happen this fortnight otherwise jobs will go – and I’m not prepared to see that happen. Time is fast running out,” Shorten said Sunday.

“Labor’s position is clear – we want to see strong renewable energy industry in Australia, one that is not undermined by the ideology of the Liberal party. The sector needs certainty and we need a deal now – and we will do everything we can to ensure that happens.”

Renewable industry sources expect Shorten will use the meeting to try to reach an agreed position on a compromise to put to the government – higher than its current 31,000-gigawatt- hour stance but lower than Labor’s previous position. A compromise could possibly be around 34,000 gigawatt hours.

The chief executive of the clean energy council, Kane Thornton, said the government’s current position was “clearly unacceptable to industry”.

Shorten has invited industry, union and renewable energy representatives to his Monday summit.

As well as the overall target, industry has been urging the government to deal with a glut of renewable energy certificates in the market, perhaps by extending the end date of the scheme.