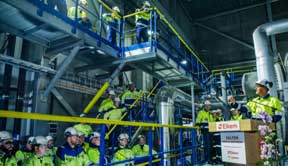 With a target to recovering 28% of the electrical energy used at its silicon plant, Norwegian silicones maker Elkem recently opened its energy recovery plant in Salten, in the northern part of Norway. The amount of energy recovered will equal to the power consumption of about 15,000 Norwegian households. Together with other energy recovery installations implemented at Elkem plants, this brings the total energy recovery of the group to approximately 900 GWh per year, similar to the capacity of the largest wind park in Norway.

This latest installation also positions Elkem Salten as one of the most energy effective silicon plants in the world, in line with the ambitions of Elkem’s climate roadmap towards net zero by 2050, further strengthening its competitiveness.

“Elkem aims to be part of the solution to combat climate change – and to be one of the winners in the green transition. The new energy recovery plant at Elkem Salten, developed together with our partners in Kvitebjørn Energi and with financial support from Enova, further strengthens our efforts to ensure environmentally friendly silicon and ferrosilicon production with the lowest possible emissions and lowest possible use of resources,” says Elkem’s CEO, Helge Aasen.

The energy recovery plant, built in partnership between Elkem, Kvitebjørn Energi and financing partner Nordea, represents an around NOK1.2 billion investment. Enova, the Norwegian government’s funding agency for energy efficiency improvements, has approved a grant of up to NOK 350 million. At the time it was awarded, this was the third largest industry grant that Enova has ever provided.

Elkem says it has a strong position to contribute on climate. The company already uses 83% renewable electricity in its operations. Elkem is also externally recognised for climate actions: Ranking among the world’s top 5% companies rated by CDP in 2020. Elkem aims to reduce its total fossil CO2 emissions by 28% from 2020-31 while growing its supplies to the green transition.