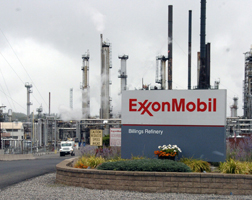 Under 12-year agreements with Denmark’s Orsted, Exxon will buy 500 megawatts of wind and solar power in the Permian Basin, the fastest growing US oil field. It is the largest ever renewable power contract signed by an oil company, according to Bloomberg NEF.

“It will be interesting to see how the other oil majors respond,” Kyle Harrison, a BNEF analyst, said. “A purchase like this has historically been unprecedented.”

Exxon was sued by investors who accused the company of downplaying risks of global warming, is turning to clean energy as it becomes cheap enough to compete with fossil fuels. The wind and solar farms are being built in a region where electricity demand is soaring as oil production grows.

Booming production in the Permian Basin is helping Exxon offset declining output elsewhere in the world. But output in the region has grown so fast that infrastructure including pipelines and power plants have struggled to keep up.

One area of the Permian, called the Delaware Basin, consumed the equivalent of 350 megawatts this summer, tripling its load from 2015. That’s enough to power about 280,000 US homes. Providers say demand is likely to triple again by 2022.

Half the power Exxon will buy will come from the Sage Draw wind farm, which Orsted plans to finish building in 2020, according to a slide from an investor presentation Wednesday. The rest will be from the Permian Solar farm, scheduled to be finished in 2021.

In August, Exxon was said to be seeking renewable energy under long-term contracts from a group of potential developers.