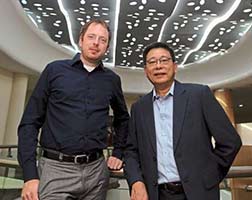 “The immediate benefit is that we are part of the cutting-edge technology, and for the business side, we see a big market potential to replace all the dirty coal boilers/furnace in China which have been shut down since January 2015.

“Clean coal is the way to go for these range of products, which we target in the range of 200, 400 and 1,000kW,” Fitters managing director Datuk Richard Wong told StarBiz.

Apart from China, AHT NRG is also looking to provide its clean energy solutions to Indonesia.

Wong said Indonesia was a different market whereby the Indonesian government wanted to reduce fuel subsidy, which was causing it to lose billions of dollars each year.

“There are plans to substitute existing diesel power generation plants with coal gasification power plants for distributed power,” he added.

AHT Syngas, through its wholly owned subsidiary AHT Services GmbH, is a leading player in designing and manufacturing biomass and coal-co-generation systems and technologies with a proven track record in power plant set-up in various countries such as India, Indonesia and Japan.

Gero Ferges of AHT Systems said its technology could reduce the production cost of energy to one-third of the electricity price compared with diesel fuel.

He said the business model it was looking at was either to operate the systems in order to reduce the electricity production cost of its customers or to sell the systems at a good margin.

“It is our intention to set up local production in Malaysia for the Asian market. We plan to localise our technology to match local pricing but without compromising on the quality of our product and its performance,” Ferges said.

Ferges concurred with Wong that China had tremendous opportunities for the group, as 60,000 boilers have been shut down to date in China to overcome the persistent smog issues enveloping the major cities in order to improve air quality.

Furthermore, Ferges said AHT technology could also use the agricultural residues or biomass which are produced and so far without any use to produce electrical and thermal energy, such as hot water and steam for industries and communities.

In another area, Ferges said its solution could also be the replacement of diesel as its solutions could reduce the production cost of electricity to a third of the price compared to generation with diesel gensets.

When asked if there are plans to spin off AHT NRG or Future NRG via a listing, Ferges said: “AHT is now listed in Hamburg under A12AGY and will upgrade to the main market in Frankfurt by year-end.”

Fitters reportedly is seeking to raise between S$20mil and S$25mil (RM51mil and RM63.8mil) from the initial public offering of Future NRG.