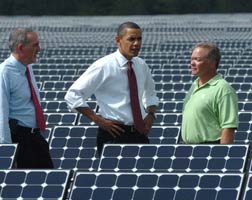 While two of the state’s largest utility companies are planning major solar power projects, property owners continue to be stymied by one restrictive state law. Florida remains one of five states that prohibits businesses and residents with solar panels from selling excess power to neighboring property owners.

That electricity can only be sold to power companies, which do not want competition from home and business solar panels — and revenue loss, even on a small scale.

The utilities enjoy a monopoly on power sales to consumers — a position the Legislature is loathe to alter. The big four power companies are major contributors to political campaigns and they hold a firm grip on Tallahassee.

Two bills intended to give tax breaks to residents who install solar panels on their homes died during the regular session.

Once again, citizens have launched a petition drive to compel Florida to adopt sensible public policies. The 2014 passage of Amendment 1, the Florida Water and Land Conservation Initiative, serves as a prime example of citizens forcing the Legislature to serve the people’s interests.

Today, Floridians for Solar Choice aim to place a constitutional amendment proposal on renewable energy onto the November 2016 ballot.

The measure is currently under review by the Florida Supreme Court, and with judicial approval FSC can proceed with obtaining the required number of signatures to place it on the ballot.

With the price of solar panels dropping substantially — by 60 %, Duke Energy Florida remarked at last week’s Tampa Bay Regional Planning Council energy conference — cost recovery for property owners will accelerate. The freedom to sell to neighbors would help, too.

The surprising element to this is a broad-based coalition of political opponents has united behind this petition drive. Republicans, Democrats, tea party activists, libertarians, businesses, Christian Coalition conservatives, liberal environmentalists and others joined hands under Floridians for Solar Choice.

As usual, though, the Republican-controlled Legislature is tone deaf to the people’s desires — even their own political allies in this case.

We hope the proposed amendment makes the 2016 ballot.

On a very positive development, Florida Power & Light plans to triple its current solar capacity by adding 225 megawatts of new power generated by building three additional arrays around the state, with one near Parrish. FPL currently operates a Next Generation Solar Energy Center near Arcadia.

Two years ago, Duke Energy Florida’s president infamously stated the Sunshine State was too cloudy to make solar power productive. Today, the company is singing a different song with a pledge to produce as much as 500 megawatts of solar power over the next decade, doubling current solar production.

Kudos to both utilities for vowing to invest heavily in this clean energy.

On the consumer-friendly front, should a petition addressing the constitutional amendment come your way, we recommend a signature. Floridians deserve a vote on this since legislative action is inconceivable. – Bradenton.com