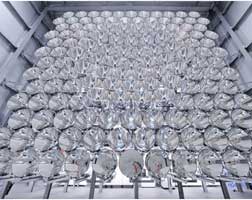 The German Space Center (DLR) has constructed and opened the world’s largest artificial sun to help the country’s commitment to investigating renewable energy.

The sun is one of the greatest potential energy sources available, but developing new technologies to exploit this potential can be hampered due to various environmental and geographical factors.

To provide a more reliable and controllable substitute, scientists and engineers have built their own artificial sun for laboratory work. Instead of using a giant ball of fusing gas 93 million miles away, DLR has built a huge device that works like a backwards parabolic reflector.

Where a more conventional spot lamp uses a single powerful light source focused by reflecting it off a parabolic mirror, Synlight is a giant parabola made up of 149 7-kilowatt (kW) xenon short-arc lamps capable of delivering 11 megawatts per square meter (MW/m2). These can be adjusted to focus on a single spot measuring 20 x 20 cm (8 x 8 in) in three different test chambers, two of which are exposed to 220 kW of solar radiant power and the third to 280 kW.

At maximum setting, the device can deliver 320 kW, or 10,000 times the normal solar radiation experienced on earth’s surface, and temperatures of up to 3,000 degrees Celsius (5,400 degrees Farenheit).

According to DLR, these extremely high temperatures are necessary to carry out research on processes that use the sun to produce solar fuels like hydrogen. Though hydrogen is seen by some as the green fuel of the future because it leaves behind only water when it burns, producing it requires large amounts of energy, which usually comes from burning fossil fuels.

DLR hopes the Synlight will help researchers to find a more efficient way to split water into hydrogen and oxygen using the Sun. This has already been accomplished in the laboratory, but has yet to be scaled up to industrial levels.

In addition to solar-generated hydrogen, DLR sees Synlight has having other applications, including studies of how materials age under extreme UV rays.

“Synlight fills a gap in the qualification of solar thermal components and processes”, says Dr. Kai Wieghardt. “The scale of the new artificial sun is between laboratory systems like DLR’s high-performance lamps in Cologne and the large-scale technical facilities such as the solar tower here in Jülich.”

The artificial Sun cost a total of EUR3.5 million (US$3.77 million), most of which was provided by the state of North-Rhine Westphalia, with BMWi contributing EUR1.1 million (US$1.2 million).