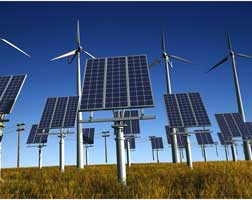 Solar and wind power now costs the same or even cheaper than new fossil fuel capacity in more than 30 countries all over the world, according to a December 2016 report by the World Economic Forum (WEF), a Geneva-based international organization committed to improving the state of the world through public-private cooperation.

As the cost of solar and wind power projects continue to fall, two-thirds of all nations will reach the point known as “grid parity”within a few years, even without subsidies. Grid parity occurs when a developing technology or an alternative source of energy can produce electricity for the same or less cost to ratepayers as traditional technologies or electricity “grid”.

Michael Drexler, who leads infrastructure and development investing at the WEF, said in a statement that renewable energy has reached a tipping point. “It is not only a commercially viable option, but an outright compelling investment opportunity with long-term, stable, inflation-protected returns,” he said.

In 2016, utilities added 9.5 gigawatts (GW) of photovoltaic capacity to the US grid, making solar the top fuel source for the first time in a calendar year, according to the US Energy Information Administration’s (EIA) estimates. The US added about 125 solar panels every minute in 2016, about double the pace last year, reports the Solar Energy Industry Association.

Solar power impresses even more after accounting for new distributed solar on homes and business (rather than just those built for utilities), which pushed the total installed capacity to 11.2 GW.

However, global investment in renewable energy still lags far behind levels needed to avoid potentially catastrophic global warming, according to the United Nations (UN). Global renewable investment last year was US$286 billion, or 25% of the US$1 trillion goal set by nations at the Paris climate change accord.

The WEF further reports that barriers to renewable energy investment are mostly political rather than economic: Contracts are not standardized, regulatory uncertainty remains, and financial institutions have not created an asset class with a public, standardized track record that will reassure mainstream investors.

But prices are eventually expected to win the day. Solar is projected to fall to half the price of electricity from coal or natural gas within a decade or two. That milestone has already been reached in some areas. In August, energy firm Solar pack contracted to sell solar electricity in Chile at just US$29.1 per megawatt (MW) hour, 58% below prices from a new natural gas plant.