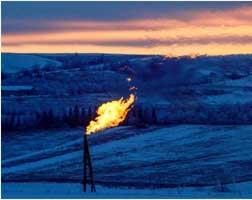 Publishing its Annual Energy Outlook for 2017, the US Energy Information Administration (EIA) expects natural gas production in the US to continue to increase until 2050, which will help the country become a net energy exporter by 2026.

Gas production “is actually going to go up quite a bit, with relatively low and stable prices,” supporting higher levels of domestic consumption, especially in the electric and industrial sectors, EIA Administrator Adam Sieminski said in a briefing on the annual report.

As production outpaces domestic consumption, LNG exports are expected to rise to 12 billion cubic feet per day by the end of the forecast period – or even higher, under favorable price, resource and technology assumptions.

When factoring in cross-border pipeline trade with Canada and Mexico, the US may well become a net exporter of natural gas by a margin of as much as 15 billion cubic feet per day.

On the supply side, crude production is expected to rise slightly through the mid-2020s, and then remain flat – unless oil prices rise dramatically.

EIA expects a price recovery to US$80 per barrel within four years, followed by a gradual rise to more than US$100 per barrel by 2040. If prices should rise much more sharply, the agency predicts that US oil production will increase by about one third by the early 2020s, and then decline to meet reference levels by 2040.

Under most scenarios, the US would remain a net importer of petroleum throughout the forecast period.

In electrical power generation, coal consumption is expected to decline, losing market share to natural gas and renewables. Of all energy sources, renewables are expected to grow fastest (on a percentage basis) due to increasing economies of scale and continued government support.