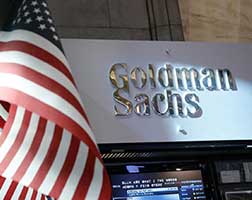 The onus for restoring the oil price back to an equilibrium lies squarely on the shoulders of countries like the U.S. and not on the Organization of the Petroleum Exporting Countries (OPEC), a top Goldman Sachs analyst told CNBC.

Michele Della Vigna, head of European energy research at Goldman Sachs, said non-OPEC oil producers had created the oversupply in the market which has weighed on prices.

“I think the market has realized that where we need to find the adjustment is onshore U.S. and that’s where the market is focused,” he told CNBC Thursday.

“The adjustment is starting to happen there. Clearly an OPEC cut would help getting to the equilibrium faster, but at the end of the day, it is non-OPEC that needs to sort out the oversupply that it has created.”

Weak global demand and booming U.S. shale oil production are seen as two key reasons behind oil’s price plunge, which has fallen around 50 % since mid-June last year. OPEC’s reluctance to cut its output at its last meeting in November has also weighed on the commodity.

OPEC, a group of 12 major oil producers which accounts for 40 % of the world’s crude oil output, has continually iterated that the organization has no intention to meet again until June. But Della Vigna said he believes a cut in production at this meeting is even less likely than at November’s talks.

OPEC countries are able to extract oil from the ground at a cheaper cost than U.S. shale firms, and there has been speculation that the two industries could be playing a “game of chicken” before cutting back to ease oversupply.

So far, the U.S. has bared the brunt of the cut in production, with data from the EIA (Energy Information Administration) Wednesday showing a fall in the amount of rigs that are in operation and a drop in U.S. output for the first time since late December.

This helped snap a three-day losing streak for oil, with gains of around US$2. But the commodity edged lower again on Thursday morning, with West Texas Intermediate (WTI) futures falling 0.13 % to 49.95 a barrel by 9:00 a.m. London time, and Brent crude futures falling 0.2 % to US$56.91 a barrel.

Negotiations over Iran’s nuclear deal have also dented the price of oil over recent days, as talks overran a self-imposed deadline.

Any positive resolution is seen as negative for the commodity, as the lifting of sanctions could see Iran release yet more oil into an already oversupplied market. Tensions in Yemen have also complicated matters, with many analysts telling CNBC that violence in the Middle Eastern country is essentially a “proxy war” between Iran and Saudi Arabia.

U.S. Secretary of State John Kerry has extended his stay in Lausanne, Switzerland, where the Iran talks are taking place, but White House Press Secretary Josh Earnest stated late Wednesday that the U.S. would “walk away” if it sensed that the talks were stalling.

Meanwhile, Iranian Foreign Minister Mohammad, Javad Zarif, told reporters Wednesday that there are obvious problems that have prevented a solution so far, but he added that he hoped his international colleagues would recognize that this was a “unique opportunity that will not be repeated.”

Goldman’s Della Vigna reiterated his call for Brent to find an “equilibrium” of US$70 by year-end, but also said that the near-term risk is for the commodity to fall to US$40 a barrel during the summer months.

He added that a “super spike” to above US$100 a barrel was becoming increasingly unlikely and said that US$25 a barrel for oil was also not a likely scenario.

Amrita Sen, a chief oil analyst at Energy Aspects, told CNBC Wednesday oil prices were unlikely to fall much lower than their current levels. She argued that demand for the commodity was “phenomenal” and was absorbing a lot of the oil that was being produced. – CNBC