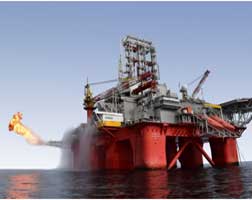 North Sea oil exploration company Hurricane Energy has discovered what it describes as the “largest undeveloped” oil find in the UK Continental Shelf.

The company said it has located a kilometer-deep oil column which is believed to connect to an existing field. The discovery is near the Shetland Islands, off the north coast of Scotland.

“This is a highly significant moment for Hurricane and I am delighted that the Halifax Well results support the Company’s view that its substantial Lancaster discovery has been extended to include the Halifax license,”said Hurricane Chief Executive Robert Trice.”We believe that the GLA (Greater Lancaster Area) is a single hydrocarbon accumulation, making it the largest undeveloped discovery on the UK Continental Shelf,” he added.

According to local media, Hurricane needs to raise about US$400 million to develop the project and aims to start producing oil from the field in 2019.The firm’s 2016/17 drilling campaign is now complete with a 100% success rate.

The North Sea oil industry has been hit hard by the collapse in oil prices since 2014 which resulted in significant job losses.