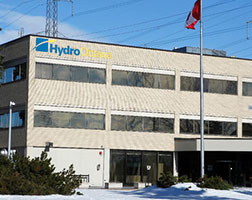 Ottawa City Hall will be tapping into electricity consumers in New York as it snaps up a line of small power stations.

The acquisition is the first for Ottawa City Hall and is made in an agreement with Fortis Inc.

The acquisition also includes six small hydroelectric generating plants in eastern Ontario, including one in Ottawa not far from the prime minister’s residence.

It was an auction process and Hydro Ottawa submitted a bid, but CEO Bryce Conrad wouldn’t say how much the utility is ultimately paying.

“I don’t want to tell you the price simply because we’re in conversations in other situations for other assets,” Conrad said in an interview Wednesday.

However, Hydro Ottawa has relayed the cost to the bosses at the City of Ottawa, the utility’s sole shareholder.

Conrad reassured the utility hired the “best consultants money can buy” to analyze the purchase.

The revenue from capital assets — like the ones that generate power for the provincial grid — are what help fund the utility’s annual dividend to City Hall.

The new assets in Ontario are two plants in Kingston and one in each of Ottawa, Rideau Lakes, Gananoque and South Crosby. Power from those sites will be sold to the Ontario grid.

The New York electricity — generated at sites in Lyons Falls, Dolgeville, Philadelphia and Diana — will be sold to that state’s grid, Conrad said.

He predicted the revenue will have a positive impact on the dividend to the city. The city collected $18.2 million based on the utility’s performance in 2014.

The utility’s capital investments are separate from the regulated rates charged to electricity customers to maintain the local distribution system.

The council-endorsed strategic plan for Hydro Ottawa calls for an expansion of renewable electricity generation, including looking beyond Canada’s borders for investment opportunities.

Although, Conrad noted, “We’re not going to China anytime soon.”

“I’ve described to the board it’s a bit like whack-a-mole,” he said. “When something pops up you either hit it or you let it go.”