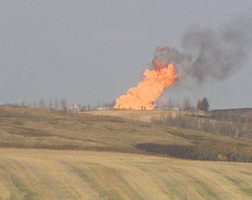 REGINA – SaskEnergy is preparing to look even deeper into the blaze that took place at its natural gas storage facility south of Prud’homme last year. The crown corporation is trying to determine exactly what caused the nine-day inferno in Saskatchewan.

An engineering lab in Calgary tested and determined that the original wellhead, which controls the flow of gas in and out of the underground cavern, was not a contributing factor.

SaskEnergy’s preliminary investigation identified an obstruction 3.5 metres underground in the pipe that links the cavern to the surface. The cavern is located a kilometre below the surface in a deep salt formation.

Water will be pumped into the cavern in order to displace the remaining gas which will be transferred to another cavern at the facility. A closer inspection of the well casing obstruction will then be conducted.

The project is expected to take 30 weeks.

The blaze ignited on Oct. 11 and was safely contained on Oct. 17 with the installation of a new wellhead. No service was lost to any customers and the remaining six caverns at the site were not impacted.

Immediately after the incident, SaskEnergy and contractors began temporary repairs to ensure the facility was back in operation before peak winter months. Permanent above-ground repairs have since been completed. – Globalnews.ca