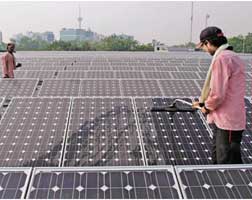 India’s central government has decided to remove interstate transmission charges for solar power projects until December 2019, giving the sector an opportunity to compete with thermal power.

The decision was taken by the Ministry of Power in consultation with the Ministry of New and Renewable Energy (MNRE) and other stakeholders since imposition of charges would have raised cost of using solar power from another state by Rs1-2.50 per kilowatt-hour (kwH), depending on the distance it is transmitted and voltage at which it is supplied.

According to an order signed by Jyoti Arora, joint secretary in the Ministry of Power, “for solar generation projects based on solar resources, no interstate charges or losses will be charged for use of the interstate transmission system …till December 31, 2019.”

Exemption period was due to end on June 30. Solar tariffs have been falling steeply in recent years, touching an all-time low of Rs2.44 per kwH at Rajasthan’s Bhadla solar park auction in May, very much on a par with thermal power. But imposition of interstate transmission charges would have affected capacity to compete.

There was apprehension among solar developers that given the rapidly falling solar tariffs in successive auctions, the government might no longer consider solar power deserving of such subsidy support.

“Even though solar tariffs have come down sharply, removing the waiver does not make sense at this stage as the original policy objective is still far from being met,” said Jasmeet Khurana, associate director at solar consultancy Bridge to India.

The last revised tariff policy of the central government, announced in January 2016, had provided that “in order to further encourage renewable sources of energy, no interstate transmission charges or losses may be levied for such period as may be notified by the Central government on transmission of electricity generated from solar and wind sources.”

On September 30 last year, the ministry of power passed an order waiving such charges for wind energy projects up to March 2019, but only up to June 2017 for solar projects.

“It is only now that power procurers have started to use the interstate transmission route to source solar power,” said Khurana.

The Delhi Metro Rail Corporation (DMRC), for example, signed an agreement in April to draw most of its daytime power needs from the 750 MW ultra-mega solar power project – three plants of 250 MW each – being built at the Rewa solar park, Madhya Pradesh.

“Rajasthan can produce so much more solar energy than it needs for its own consumption and can sell it to other states,” said Sunil Bansal, general secretary, Rajasthan Solar Association.

“Waiving transmission charges will generate income and employment in Rajasthan and benefit other states as well.” The government has set itself a goal of 100,000 MW of installed solar power by 2022, and has currently reached only 12,504 MW (end April).