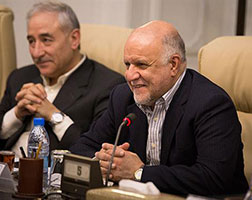 They discussed the sale and purchase of petrochemicals and investments in Iranian oil and gas projects, through the transfer of technology and engineering contracts, The Wall Street Journal quoted him as saying.

German companies are vying to regain their foothold which they lost in Iran in the wake of a concerted US and European campaign to pressure the country over its nuclear program.

Both sides are currently in talks with the Islamic Republic to reach a final settlement to their disagreements which would remove sanctions on Iran.

“We are trying to prepare the basis for better cooperation when sanctions are lifted,” Zangeneh said, The Journal reported.
The talks mark some of the rarest encounters between high-profile Iranian and European officials in recent years.

Zangeneh is a veteran, influential minister with a portfolio spanning the entire history of the Islamic Republic. Gabriel is also Germany’s vice chancellor and minister for economics in Chancellor Angela Merkel’s government. – Press TV