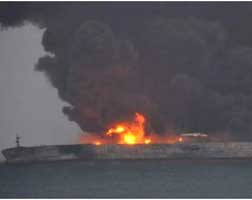 A tanker carrying Iranian oil that collided with a Chinese freight ship in the East China Sea over the weekend was still ablaze on Monday morning, a South Korean coast guard official said.

It was not known if any of the tanker’s missing 32 crew members had been rescued, said the official, who declined to give his name as he was not authorized to speak to media. He was speaking as of 8 a.m. Korean time (2300 GMT, Sunday).

The Sanchi tanker run by Iran’s top oil shipping operator, collided with the CF Crystal about 160 nautical miles off China’s coast near Shanghai and the mouth of the Yangtze River Delta on Saturday evening.

Chinese state media CCTV showed pictures on Sunday of the tanker ablaze and billowing plumes of thick dark smoke. China sent four rescue ships and three cleaning boats to the site, while South Korea dispatched a ship and a helicopter.

The Panama-registered tanker was sailing from Iran to South Korea, carrying 136,000 tonnes of condensate, an ultra light crude. That is equivalent to just under 1 million barrels, worth about US$60 million, based on global crude oil prices