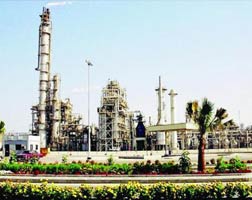 JUBAIL – The investment volume in Jubail has reached SR560 billion, including SR501 billion for the private sector, with its petrochemical sector accounting for SR34 billion of Japanese investment, according to Abdulaziz Attragi, general manager of strategic planning for the Royal Commission for Jubail.

Attragi made the statement while giving an overview of the industrial cities of Jubail and Ras Al-Khair during the Royal Commission for Jubail and Yanbu’s (RCJY) participation in the Saudi-Japanese Forum.

The event marked the 60th anniversary of the establishment of Saudi-Japanese relations.

Economy and Planning Minister Adel Fakeih, Saudi Arabian General Investment Authority (SAGIA) Gov. Abdullatif Al-Othman, the Japanese minister of economy, the Saudi and Japanese ambassadors, and many Japanese businessmen visited the RCJY’s pavilion at the exhibition held on the sidelines of the forum.

The pavilion provided exhaustive information on the RCJY and its role in the industrial and economic development of the Kingdom.

Attragi explained that the Japanese companies are technically and professionally qualified for investment in the cities of the Royal Commission as they have been successfully investing in petrochemicals across the Kingdom.

“We expect more investment cooperation forthcoming between the two sides, as our goal is to attract Japanese investors to take advantage of available opportunities, and contribute effectively to the sustainable development, in addition to share expertise,” Attragi added.

The RCJ (Royal Commission of Jubail) has made great efforts in supporting manufacturing as the Kingdom presents a great opportunity to compete in this field through many finished products.

Japan ranks fifth in terms of foreign direct investment in the Kingdom.

It has 83 projects, including petrochemicals, pharmaceutical, electrical appliances, textiles, and financial services, with a total funding of US$ 15 billion, Attragi added. – Arabnews.com