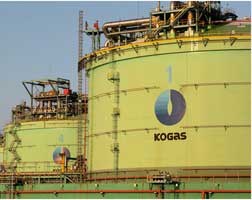 Korea Gas Corporation (KOGAS), a South Korean public natural gas company and the world’s No.2 buyer of liquefied natural gas (LNG), is considering participation in US shale gas projects to reduce any potential trade pressure on South Korea from the US government.

Repeatedly criticizing the trade policies of South Korea’s neighbors, Japan and China, US President Donald Trump has pulled the US out of the 12-nation Trans-Pacific Partnership that has been pushed by his predecessor Barack Obama.

Lee Seung-hoon, CEO of state-run KOGAS, said this could result in increased US trade pressure. However, Lee added that US gas investments could possibly work as a tool against trade pressure.

Just a decade ago, the US was expected to become an importer of LNG. But the recent shale gas revolution in the country unlocked cheap, abundant gas supplies, allowing the US to become an exporter instead.

Taking advantage of the Panama Canal expansion last year that allows bigger ships to cross from the Gulf of Mexico into the Pacific, it has been pushing to ship more cargoes to meet surging demand in parts of Asia.

“Securing US shale gas is crucial because it’s an important resource,” said Lee, adding that such imports would help keep its supplies stable.

KOGAS in 2012 signed a deal with Texas-based Cheniere to bring in 2.8 million tons of LNG annually for 20 years starting from this year. Lee said the first cargoes from the deal were expected to arrive in South Korea this summer.

Lee also said that the company could eventually import LNG from both the US and Iran without so-called ‘destination restrictions’, or clauses in contracts that limit possible buyers for any resales of the cargoes.

Iran, despite having some of the world’s biggest natural gas reserves, does not have LNG export facilities, so shipping its gas to South Korea would require vast investment and would take many years to develop.