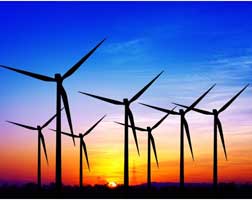 Hydropower has been surpassed by wind energy as the biggest source of renewable energy in the US after the wind power sector saw its second-biggest quarter ever for new installations, according to a Washington, DC-based wind industry trade group.

By comparison, US hydroelectric capacity is about 80,000 MW, according to the federal Energy Information Administration (EIA).

The 8,303 MW added for the year represented more than US$13.8 billion in investment.

Just three turbine makers — General Electric Co. (GE) from the US, Vestas Wind Systems A/S from Denmark, and Siemens AG from Germany — accounted for up to 95% of the US turbine market in 2016.

Texas has more than 20 MW of installed wind capacity, or nearly a quarter of the market. Iowa is the second-biggest wind state, and Oklahoma overtook California for third place at the end of 2016.

The first offshore wind project in the US also came online in the fourth quarter, the 30 MW Block Island wind farm off the coast of Rhode Island.

Corporations and others outside the utility industry have become major purchasers of wind energy, accounting for 39% of capacity contracted in 2016. Projects for Google, Amazon, and General Motors were completed in the fourth quarter.