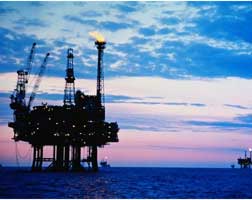 The struggling North Sea oil industry will soon be given new life with the opening of a new research and development facility, called the Oil and Gas Technology Centre, in Aberdeen, Scotland that will act as a bridge between big oil producers and small tech firms.

Research projects for the oil industry have recently been neglected as many production platforms were sold by the big oil majors to much smaller firms.

Oil supply company Mistras has been developing technology more commonly used to enable expectant mothers to see their babies. The ultrasound scanners, complete with cold jelly, are being used to detect corrosion in pipes.

The Dyce-based company hopes the technology center will help them get their product to new customers.

Mistras managing director Tim Walsh said they are hoping the technology center will allow them as an organization that has solutions to particular existing problems in the industry to better connect with end-users and clients and get more traction.

The Oil and Gas Technology Centre will invest in small firms with solid ideas and help pair some of those developers with the offshore operators that need them.

Chief executive Colette Cohen said they have about 60 operators in the North Sea now compared to the five or six operators they had in the 80s, so they are seeing a hugely different setting now. The newer, smaller operators don’t have a technology organization as it wouldn’t be economic, she added.

“So this is a time when we can provide that service to them,” Cohen said.

The new center will build on the existing work being carried out by Aberdeen’s two universities.

At Robert Gordon University they have a drilling-rig simulator where they train students and refresh the skills of those in the industry.They will now be able to incorporate new technologies into their models to see if they work effectively.

Prof. Phil Hassard said, “They’ll be able to get the results back from that… they can be tested here and are more cost effective than trying to do it on a real rig.”

The center’s conception stems from the principles of Sir Ian Wood’s report into maximizing economic recovery in the North Sea.The oil tycoon will be one of the invited guests at the official opening.