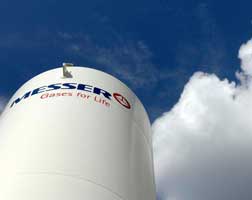 Messer LLC (Messer) is to begin construction on a new Carbon Dioxide (CO2) plant in Keyes, California. The plant will provide 450 tons-per-day of CO2, an essential product for carbonated beverages, food freezing & chilling, and electronics manufacturing. The product is also used by a wide range of industrial companies in northern California and surrounding areas. The new plant is slated for completion in Q4 2019.

“This investment represents our commitment to strategic U.S. expansion to meet growing market demand,” said Jens Luehring, President/CEO, Messer Americas. “We’re dedicated to providing a reliable supply of industrial gases to our customers and look forward to breaking ground on this plant to further meet that need.”

On March 1, 2019, Messer Group and CVC Capital Partners Fund VII (CVC) acquired most of the North American gases business of Linde plc, as well as certain Linde business activities in South America.  With over 70 production facilities and approximately 5,400 employees operating in the US, Canada, Brazil, Colombia, and Chile, Messer today is one of the leading industrial gas companies in North and South America. Together with Messer Group, the company represents a US$3 billion global enterprise with presence in the Americas, Europe and Asia.

Luxfer Holdings and Neo Performance Materials Inc. have mutually agreed to terminate the previously announced transaction ( under which Luxfer would have acquired Neo for US$612 million in cash and stock.

US-based Luxfer is a global manufacturer of highly-engineered advanced materials, components, and high-pressure gas containment devices that are used in defence and emergency response, healthcare, transportation, and general industrial settings.