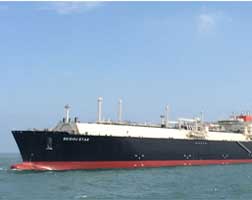 Japanese transport company Mitsui OSK Lines (MOL) is looking to explore power generation from liquefied natural gas (LNG) aboard ships instead of from onshore power plants. The move could give the company a leg up on the competition since the field has little precedent worldwide.

Tankers would supply LNG to power generators on ships, with the resulting electricity sent to shore via underwater cables. This could keep site acquisition and other initial costs low compared to power plants on land. The company is considering shopping the idea to emerging countries wary of the high price tag that comes with building power plants.

The environmental impact would be minimal since LNG does not emit much carbon dioxide.

Mitsui OSK is looking to diversify beyond shipping, a business heavily affected by market conditions. It would take less than 10 years to enter the market, President Junichiro Ikeda said.

Japan’s three largest maritime transport companies are navigating a historical slump in the market and will merge their container ship units in July. Each company is expanding its offshore and energy businesses as part of diversification efforts.

The Tokyo-based company will also operate a floating storage regasification unit, or FSRU, in Uruguay that converts gas from its chilled, liquefied state to its gaseous state and sends it to land.