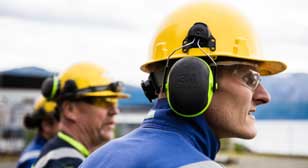 The Research Council of Norway has granted materials firm Elkem NOK16 million to develop a new concept for silicon production where all direct CO2 emissions are eliminated. This may become a game changer for the global silicon industry. Silicon is a critical material for digital technologies and the green transition.

Elkem, a global leader in silicon-based advanced materials, aims to be part of the solution to combat climate change – and to be one of the winners in the green transition. The company already uses 83% renewable electricity in its operations.

In its climate roadmap, Elkem has stated ambitious goals of reducing its CO2 emissions by 28% by 2031 and achieving carbon-neutrality by 2050. The granted R&D project focuses on Elkem’s 2050 goal: How to achieve carbon neutrality at the lowest environmental footprint and competitive costs?

“Elkem’s goal with this project is to develop a concept that eliminates all direct CO2 emissions from silicon production. Carbon oxides in the off gas from the smelting furnaces will be captured, converted to solid carbon, and reused in the process. In short: Silicon production with carbon looping. If and when we succeed, this may become a game changer for the global silicon industry. We believe that this is a strong candidate to become a main technology for carbon neutral silicon production beyond 2050,” says Elkem’s senior vice president for Technology, Håvard Moe.

He adds: “The development of this concept is a prioritised task in Elkem’s long term climate strategy. Industrialisation of the concept will result in vastly reduced CO2 emissions from Elkem’s silicon production, giving Elkem increased competitiveness in its markets. Elkem may also licence the technology to other manufacturers, enabling silicon production at minimal climate and environmental footprints globally.”

The project will run from 2022-2024. Elkem is project owner and Aasgeir Valderhaug is project manager. The Norwegian R&D institutes SINTEF and NORCE, and the pilot test centre Future Materials, will be research partners. The experiments on laboratory scale will be performed at SINTEF, while the experiments on bench scale will be performed at Future Materials at the Fiskaa site in Kristiansand. Elkem researchers will be deeply involved in planning, execution and evaluation of the experiments and will also be responsible for process modelling, where NORCE will have a key role.