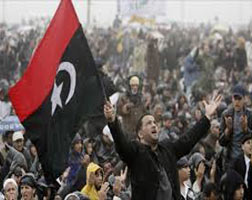 Oil rose to near US$62 a barrel on Monday, supported by concerns over the escalating conflict with Islamic State militants in Libya and predictions of lower supply levels in the second half of the year.

Egypt’s air force bombed Islamic State targets inside Libya and Cairo renewed calls for a US-led coalition to confront militants there, a day after the group released a video appearing to show the beheading of 21 Egyptians.

“The geopolitical risk is not something to write off,” said Olivier Jakob, oil analyst at Petromatrix in Zug, Switzerland.

Libya’s oil production has mostly shut down, falling to 350,000 barrels per day (bpd) from 1.6 million bpd before the 2011 ousting of leader Muammar Gaddafi.

The El Sarir oil field was still unable to pump oil on Monday after a pipeline was attacked and set on fire.

“Hopefully in the second half of 2015 we will see better prices,” said the minister, Ali al-Omair.

Benchmark Brent futures traded at US$61.93 a barrel, up 41 cents, by 1257 GMT. US crude was up 20 cents at US$52.97 a barrel. Trading volumes were reduced as US markets remained closed for a public holiday.