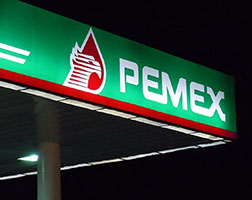 Mexican state-run oil firm Pemex could sell its refining and petrochemical business and invest the proceeds in more profitable areas like exploration and production, the company’s finance chief was quoted as saying on Wednesday.

“We will have to at some point take a decision to see if we continue with those activities,” Mario Beauregard, Pemex’s Chief Financial Officer, told Mexican newspaper Excelsior, referring to the refining and petrochemical business.

“One of the options we can take is sell those assets, sell Pemex’s stake, and with that money, invest it in areas that generate more value, like exploration and production.”

He gave no further details on when a decision could be made.

The company’s revenue has been hit by a slump in global oil prices, and exacerbated by declining output.

Pemex’s oil production has fallen by nearly one-third since hitting a peak of 3.38 million barrels per day in 2004.

The company, which funds about a third of Mexico’s federal budget, reported a 100.5 billion peso (US$6.6 billion) quarterly loss in the first quarter of 2015.

As a result of the oil slump, Pemex has announced massive budget cuts for this year, as well as a delay in the execution of capital projects including major refinery reconfigurations and ultra-low sulfur fuel projects.

The company had previously said it could add deep conversion coking units to three of its six domestic refineries.

Pemex’s refining unit has racked up billions of dollars in losses over the past few years as the government has maintained a long-standing policy of setting fuel prices.

Pemex, which is set to compete head on with private oil companies for the first time in decades following a sweeping energy overhaul enacted last year, is also renegotiating service contracts in an effort to cut costs.